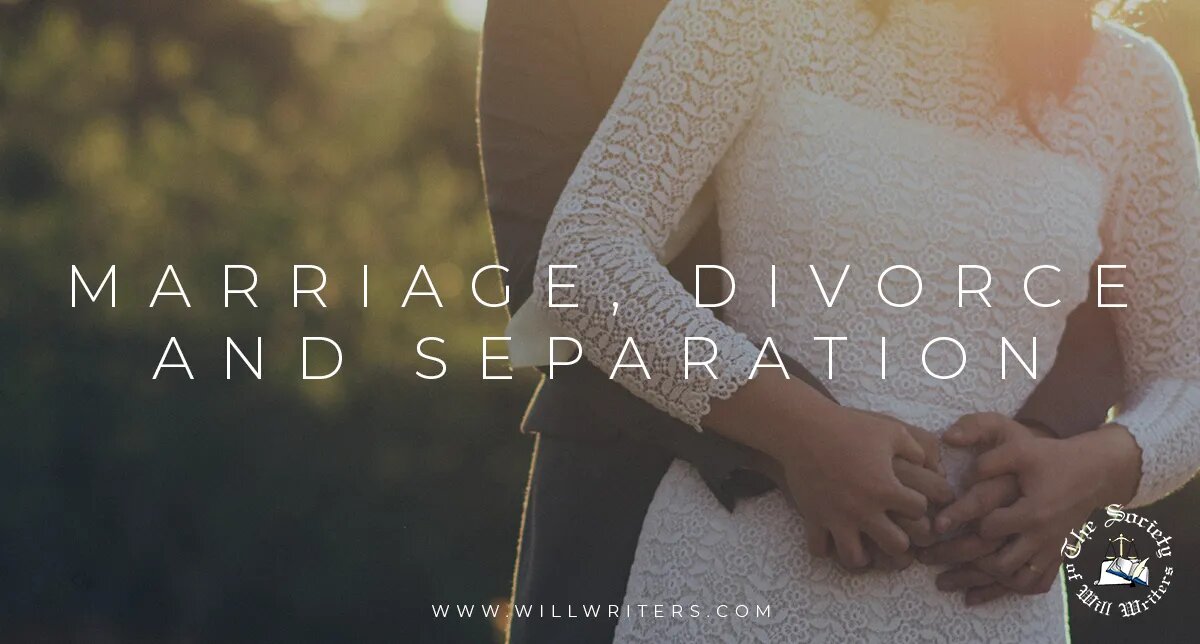 It is often misunderstood the effect your marital status can have on your Will, arguably sometimes it is particularly unclear. Maybe you wish to have a better grasp of where you stand and what is going to happen if you should pass away given your marital status.

This article aims to help clear up some of the lesser-known rules around Will Writing and Marital Status as the two are much more linked than you may suspect.

(A small disclaimer: all references to marriage and divorce are interchangeable with civil partnership and dissolution.)

While we are all aware of what Marriage and Civil Partnership is, less commonly known is that marriage has a distinct effect on how you should write a Will. It is mistakenly believed that marriage has no effect on your Will and that there is no concern here.

But in fact, marriage can outright revoke your Will completely unless you take steps to ensure that this doesn’t happen. The reason this is a particularly important issue is that if you were to have children from a previous partnership and have a Will benefiting them, by marrying someone new you could be disinheriting them completely by accident.

So, if marriage automatically revokes a Will, but you don’t want this to happen to you when you do marry, then what can be done?

This is where the clause known as Contemplation of Marriage comes in, this clause is used in Will Writing where you express a contrary intention to the ‘automatic revocation’ of your Will upon getting married. Specifically, this clause is a declaration within your Will that your intended marriage to your potential future spouse shall not have the effect of revoking your Will.

Okay, but do we have to get married within a certain time limit for this to take effect?

I have this clause in my Will, but I am with a new partner since then, is this clause still valid?

What happens if I didn’t manage to include this clause/ revoked my Will?

Just as in real life as under Succession law, divorce is never straightforward. While we have just seen how marriage can affect your Will, divorce also has its own unique effect on the Will. While it may seem logical that divorce would invalidate a Will, it interestingly only has the effect of treating your ex-spouse as if they died on the day of the divorce, as seen under Section 18a of the Wills Act 1837.

What would being divorced mean for my current Will?

However, unlike in marriage, there is no ‘contemplation of divorce’ clause, so something to watch out for is that until the Decree Absolute has been issued and the divorce officially completed, the other person is still for the purposes of your Will and Succession Law considered to be your spouse with all the entitlements that brings.

Okay so we know that divorcing means that the Will treats the ex-spouse as having predeceased and does not revoke the Will; what if you are separated but would still wish your spouse to benefit or act as an executor or trustee even after the divorce is finalised?

What does stating this contrary intention do exactly?

An unfamiliar area of family law when it comes to the realm of Will Writing, it is more common to have clients who are either married/civil partners, divorced/dissolved or single/cohabiting. So, what is Judicial Separation and how does it affect writing a Will?

Judicial Separation, or otherwise known as a deed of separation does not have the same effect that a divorce has under s18a of the Wills Act 1837. While it is a legal form of separation where the partners have officially separated and have proven they are not cohabiting, it has rather unique rules when it comes to affecting the estate of a client depending particularly on one of two conditions: dying with a Will or dying intestate.

Example 1: Dying with a will that still benefits the spouse you’re separated from:

In review, we can see each unique and interesting way that different areas of Marriage/Civil Partnership, Divorce/Dissolution and Judicial Separation can have a remarkable effect on your Will and hopefully we have made it clear how instrumental understanding how your marital status affects your Will is.

TIPS FOR THE RELUCTANT EXECUTOR

As much as we try to encourage testators to speak with the people they wish to appoint as executors to inform them of their choice,

Exclusions,how do we protect our final wishes

While it is an ugly truth, sometimes there are members of a family that have done one thing or another that have earned themselves a

HOW TO LEAVE FAMILY MILLION POUNDS

Inheritance Tax (IHT), a daunting pair of words for most people and often accompanied by worries of it being complicated or a way for people to

How do you own your property? And why does it matter when you die? When you buy a home, often you are buying it with someone,

Tweets by @empwills
PrevPreviousExclusions,how do we protect our final wishes
NextTIPS FOR THE RELUCTANT EXECUTORNext